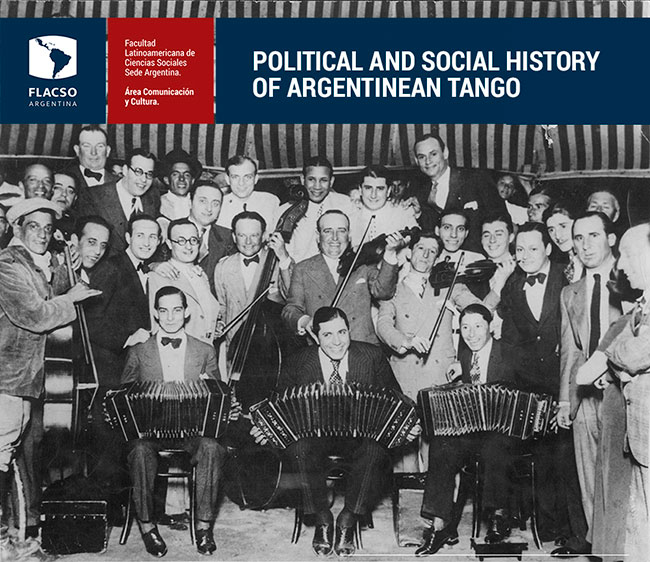 A political genealogy of tango means understanding its history, not as a mere aesthetic or musical expression of Buenos Aires, but as the discursive emergence of the political, economic and cultural conditions that gave rise to it and that explain its transformations. The relationship with social phenomena and historical conditions opens an understanding of the issues and discontinuities that tango has had throughout its centennial history.

We understand this history of tango divided into three periods: the brothel-tango (from its origin until 1910), the written-song tango (1910-1955) and the contemporary or avant-garde tango (from 1955 onwards). Each period has identity marks that defines it, on the one hand by the musical complexity and on the other, by the content of their lyrics. In between these periods there are breaks in its meaning, a thematic and musical discontinuity that the traditional history of tango reads in evolutionary terms, and it also reads new creations as individual miracles.

The proposal of this seminar is to analyze the culture of tango from a genealogical perspective starting by its historical periods: analyze the origin of the brothel-tango in orden to understand it as the effect of a way of living sexuality in society of Buenos Aires at the end of the XIX century. Thus, tango gave account of the same subjects that the hygienist policy wrote in its speeches and regulations, not as a prohibition or control but as an expression of an intense sexuality that was encouraged in titles, letters and brothel quartets.

Also understand the passage of this brothel-tango, coarse and shameless, to the written-song tango that, contrary to what it manifested in its origins, defines and reproduces values of control and social discipline. From there, we can define what does the breakthrough of the avant-garde tango means and what the conditions of this musical and discursive rupture are. This means understanding the arrival in 1955 of Astor Piazzolla and the avant-garde tango, not as a musical miracle but as an emerging type of tango from new historical conditions that arose with the ending of Peronism and that account for a strong value transformation. The disappearance of the great orchestras, the retraction of poets and authors, the end of the Buenos Aires musical comedy, the foreignization of the record companies and the burning of original tango matrices or the closing of the cabarets, are some of the symptoms that tango lived since the mid-fifties and that lead us to think, once again, of its disappearance. In this sense, underneath the question about Piazzolla’s music being tango or not, another discussion is hidden, linked to the modification of political conditions and, with it, of cultural production, which imply a new modality for tango.

This research still remains virgin in intellectual circles and the writing of books, articles or research related to the subject is, with some exceptions, in the hands of collectors or fans of tango without the critical nature of the academic spirit. The purpose of this seminar is for its students to get to know the history of tango (its music and its ways of representation), as a popular expression abundant in ideas, affections and ways of feeling, based on a genealogical tracking of its origin and its transformations, which continually refer to the political and social history of Argentina and allow to open a reading in which the tango is linked to a way of building national identity.

The program is designed by two axes, tango history and political genealogy of tango, which will be developed in each of the classes. The objective is for the students to receive an integral formation on the culture of tango that, starting from the historical conditions that originated it and that explain its transformations, allows to understand its musical development and the way its representations are built. Each class will also have what we have decided to call Bonus Track, where we share some curious contents or little known elements of the history of tango.

a) Political Genealogy of Tango: It is the main axis of the course, and its objective is making space to critical reflection for the understanding of citizen music and its changes, in the light of Argentinean political history. From its beginnings in 1880, where it appeared as an heterodox expression to the dominant culture, until the arrival of Astor Piazzolla (and contemporary tango as one of its effects), as a cultural symptom of the ending of the Peronist government, tango reveals itself as a discursive form and representation which is effect of the political, social and cultural conditions that gave rise to them.

b) History of tango: It is subdivided into two areas, musical history of tango and visual history of tango, its contents are arranged chronologically. The first one gives account of different styles in tango through a selection of musical themes that are considered constitutive of each period. Regarding the visual history, fragments of Argentine cinema films will be used that not only allow to recognize the protagonists of the history of tango but also to give account of different themes related to their mode of representation. In both cases, we will accompany the musical themes and images with an explanatory text.

Class 1. The political origen of tango

Class 6. Tango as a dance

Classes will be published one a week, every monday.

Evaluation: This course requires the approval of a final assignment.

It is required to present a degree given by any university, or justify the aspiration based on a professional or academic trajectory. In all cases, the academic committee of FLACSO will be responsible for deciding on the admission of applicants.

Those who are interested should complete the pre-application online form and send an updated curriculum vitae via email to: infotango@flacso.org.ar.

Present a copy of the university degree or background in the subject, and identity document.
Pay for the registration fee of the course.